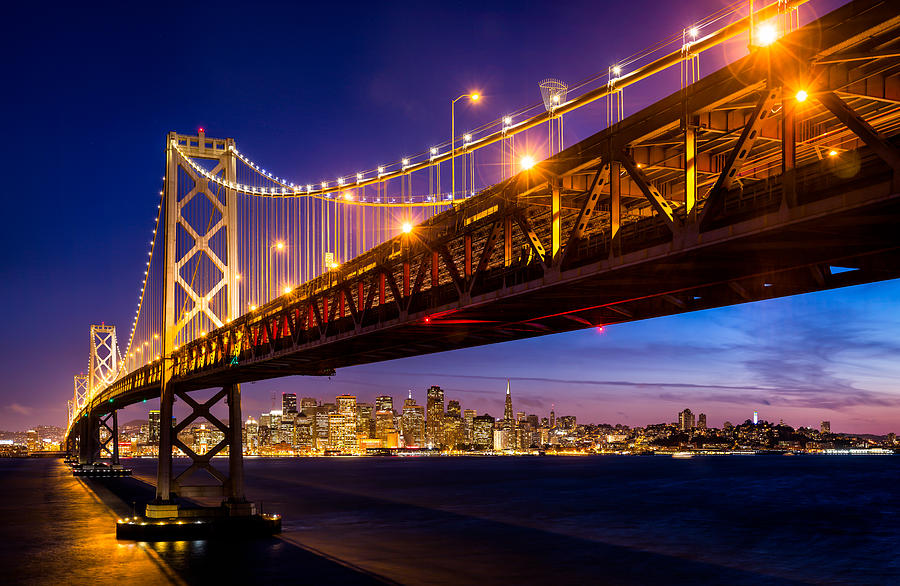 San Francisco - Under the Bay Bridge

San Francisco - Under the Bay Bridge

Downtown San Francisco glitters under a post-sunset sky while above it, the Bay Bridge crosses from Yerba Buena Island to the mainland. The Sutro Tower, Transamerica Pyramid, and Coit Tower are all clearly visible, along with many of the other downtown buildings.

This location is probably the single viewpoint I've most wanted to photograph from since I started doing photography seriously. I first saw a photo from this location on Flickr in around 2006, and fell in love with it. The unusual perspective and beautiful lights really showed how incredible blue hour photography could be.

Unfortunately, upon further research, it turns out that this location is not quite as accessible as I might have hoped. The photograph is taken from a cliffside on Yerba Buena Island, and reaching it is fraught with difficulties.

Firstly, the only option for parking is at Treasure Island, approximately a mile away. Although there is a road that passes quite near this viewpoint, there are steel barriers on one side and the continuation of the hill on the other side, which means that there is absolutely no room to stop, even for a few seconds. The only option is to park at Treasure Island and walk to the viewpoint.

This brings us to the second issue, which is that the land which the viewpoint sits on is owned by the US Coast Guard, and in order to reach it you need to ignore quite a few 'no trespassing' signs. Consequently, the California Highway Patrol frequently picks up photographers who are walking this way from the car park, as there's really nowhere else you could be going. (Additionally, you also need to walk across a highway on-ramp and off-ramp with no facilities for pedestrians, so you need to be more than a little careful).

Because of these difficulties, I've always refrained from trying to get this shot, instead going for more easily-accessed shots. (I'm not sure what the worst that can happen to a foreign national trespassing on Armed Forces land is, but these days it probably can involve a one-way trip to a certain part of Cuba...) However, the shot has always fascinated me, and as I was returning to San Francisco again in May this year, I decided to fully investigate the ins and outs.

I spent several hours researching how to reach the location, finding every photograph of it I could and reading the descriptions, comments, and so on. While there were a couple of more scary incidents (such as one photographer claiming to have drawn the attention of a Coastguard helicopter, which started hovering above with the searchlight fixed on him), the general consensus was that, if you could get to the point where you left the road and headed down the hillside to the cliff edge, you would probably be OK, especially in the evening. Furthermore, the worst that seemed to happen if you were caught on the road, at least for a first-time offender, was a stern talking to by the CHP, and being escorted back to your vehicle.

On the downside, many people reported that it took them several attempts to reach the viewpoint, as the CHP presence on the road was quite high. I was only in San Francisco for a few days, so I would have one shot at this. I decided to give it a go.

I made my effort on Friday, both as this was the best chance of a good sunset to the west, and also because I thought that the CHP may be more occupied with other issues on a Friday evening than at other times of the week. On arriving at Treasure Island to park, it was immediately clear that my assumption was flawed -- there were two highway patrol cars in the car park! I stood around an enjoyed the view from Treasure Island (a popular tourist spot), and after about 10 minutes they left. I shouldered my backpack and headed up the road.

The car park is only a little above the water level, but in order to reach this viewpoint, it was necessary to cross the bridge on a road that runs over it, so this walk is quite a steady climb. I was well aware that the quicker I did it, the less chance I would have of being spotted and returned to my starting point, so I set off at a brisk pace, looking fixedly ahead for any signs of highway patrol cars, and not daring to look back. By the time I crossed the bridge, I was extremely warm, but I was nearly at my objective!

A few metres after crossing the bridge, the road runs past the hillside that the viewpoint is on. I fairly leapt over the Armco barrier at the edge of the road, and hurried to descend far enough that I could no longer be seen by passing vehicles. I was safe!

The next challenge was to find the viewpoint. Obviously I needed to go down, as I was still at about the same height as the top deck of the bridge, so I headed down the very steep and sandy hillside. It was more sliding than walking, as for each footstep I made, I slid 3 or 4 feet until the sand settled enough to stop me. It was clear that getting back up in the dark was going to be fun, but I was hardly going to give up at this point!

Fortunately, because of the steep descent, it didn't take too long to reach the required altitude. There were a few choices of possible routes, but the bridge was visible through the trees, and it wasn't too difficult to find the viewpoint, at the edge of a cliff. Happily the ground, although still sandy on the surface, was considerably more solid, and while I was still at quite an angle, I was able to set up quite comfortably. I was, of course, the only photographer there, so I could choose the exact spot I wanted.

I'd made sure to arrive in plenty of time, so I had the opportunity to take plenty of photos as the colours in the sky changed, and the lights of the bridge and the city started to glow. I wanted to make sure that I got the perfect lighting conditions!

I took plenty of shots with my 16-35mm lens, as the bridge is quite close and towers above you. However, this shot is a stitched image taken at 105mm, and is made up of 15 individual photos, taken in a grid arrangement of 3 rows and 5 columns. This gives the original photo a resolution of around 150 megapixels, which means that it can be printed very large and still appear pin-sharp. There is plenty of lens flare from the bright street lights on the bridge, but I felt this worked rather well with the image as a whole, and didn't attempt to remove it.

After the light in the sky had faded and it was dark, I packed up my gear and scrambled back up the hillside, which was, as expected, tough going in the dark. On the walk back to the car I was passed by three different CHP cruisers, but happily was left alone, presumably as I was heading back to the parking lot!