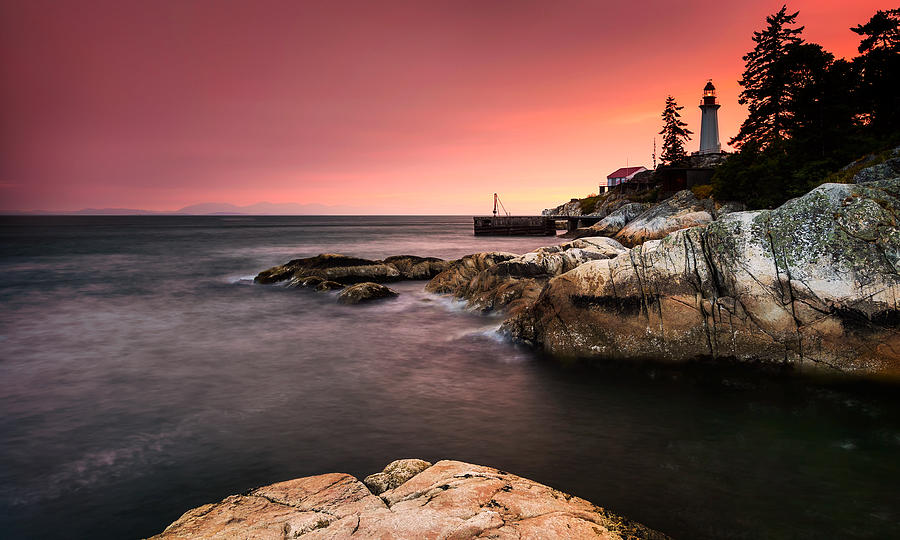 Point Atkinson Lighthouse at Lighthouse Park in Vancouver, taken during a beautiful sunset. The hills of Vancouver Island are just barely visible in the distance, through the haze.

The sun had actually set about 10 minutes before this photo was taken, but for a few brief minutes the sky suddenly lit up with colour. The peak of this colour lasted for only about 30 seconds, and after five minutes, the sky had returned to a normal level of saturation.

Fortunately I was able to quickly move and set up for this shot, and catch the light in the sky at its brightest and most impressive. An 8 second exposure smoothed out the waves, which were quite big for Vancouver's sheltered coastline, while still showing some texture in the water.

The lighthouse, built in 1912, remains active and can be seen lit up here, although the original third-order Fresnel lens is no longer in use. Unfortunately, despite being a national historic site, no funds are currently available for conservation, so the paint on the lighthouse is now starting to fade. The lighthouse has been up for sale for the last three years, with no buyer yet found.